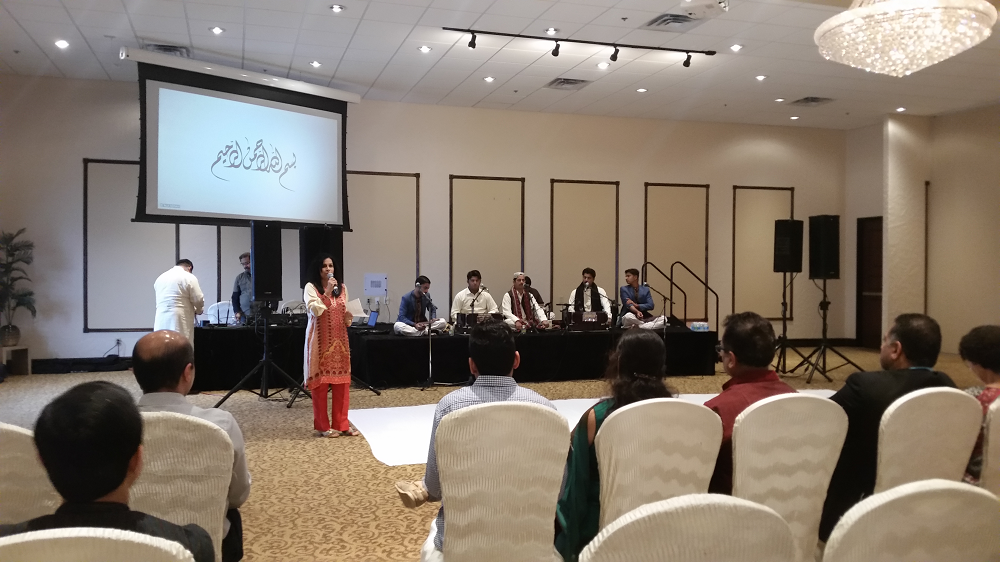 On May 19, 2016, the South Asian Islamic art form of “Qawwali” was enjoyed by over one hundred guests at the Crystal Banquet Hall in Plano, Texas.   The entertaining and educational evening was co-sponsored by Texas Muslim Women’s Foundation’s Islamic Arts Revival Series and Radio Azad.  Qawwali is a form of Sufi devotional chanting to music performed in the Indian subcontinent.  The word “qawl” is the Arabic word meaning an “utterance.” The person who repeats or sings a qawl is a “qawwal”.   What a qawwal sings is “qawwali.”1   The evening’s program was a combination of various qawwalis performed with informative introductions and explanations interspersed throughout. 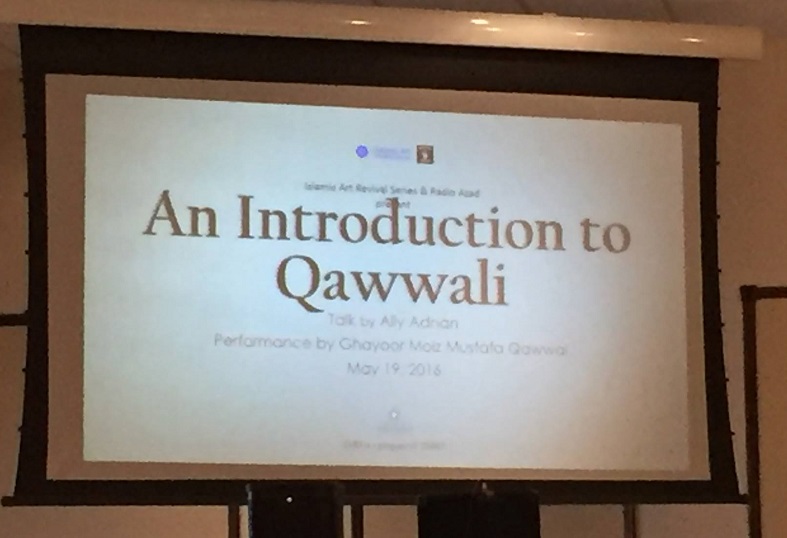 The host for the evening was the knowledgeable Ally Adnan.  He is an art collector, a musicologist, and a writer, who has written about the arts and culture in various publications for over twenty-five years.  He has also worked for more than twenty years in the wireless telecommunications industry with a master’s degree in electrical engineering.

The qawwali troupe was the masterful Ghayoor Moiz Mustafa Qawwal group. The grandfather of the current performers is the well known, Munshi Raziuddin Qawwal.  His celebrated sons Fareed Ayaz Qawwal and Abu Mohammad Qawwal are the fathers of the current generation.  Ghayoor Moiz Mustafa Qawwal traces its roots through 28 generations of qawwalis to one of the first twelve qawwalis of the formalized qawwali, Saamat Bin Ibrahim. Their family’s lineage of qawwalis dates back more than 700 years.  They have preserved the 13th century Khusrawi qawwali (formalized by Amir Khusro), which is retained in the qawwali practiced today.2

Qawwali is rooted in the pre-Islamic Hindu tradition of the Vedic period, 18 centuries prior to Islam, or 32 centuries ago.  The Vedic chants are believed to be among the oldest oral traditions still in existence.   Adnan pointed out that many faiths recite the name of the divine as a form of love and glorification of divinity, including Muslims, Buddhist, Hindus, Christians, among others.  Qawwali is not always about religion or God, however.  “In its most abstract definition qawwali is a celebration of love…it is always about love,” Adnan explained.

Initially the Vedic chants consisted of “mantras” (a repeated sound or word).  As Muslims came to the region, the chants gave rise to “zikr” or “mentioning or remembrance” (“thikr” in Arabic) in the repetition of God’s name or attributes which leads to a state of trance.  Eventually, the zikr became “samaa” or “listening” which combined zikr with supplication, poetry, singing, dancing, playing musical instruments, and other rituals to reach a higher spiritual state.  The fact that the local culture had the pre-existing Hindu chants made the Islamic qawwali more amenable to its new culture in South Asia.

The current form of qawwali can be traced back to Hazrat Amir Khusro (1253-1325 AD), who was an iconic cultural figure in South Asian history.  Adnan attributed Khusro as being “a musician, musicologist, mystic, nobleman, philosopher, poet, politician, scholar, warrior, and writer.”  Khusro was the son of a Turkic father and a Hindustani mother.  He became the devoted disciple of the highly influential Sufi saint Hazrat Nizamuddin Auliya, who stressed love as a means to reach God.  To Nizamuddin Auliya, loving God also meant loving humanity, which made him especially kind to all members of the community.  He also encouraged the use of music in worship as a means to reach a higher state of consciousness to connect with the divine.  Additionally, the use of music in devotional gatherings helped to facilitate ties with the local Hindu communities who had a similar way of worshipping.  So Nizamuddin Auliya conveyed both the importance of love of humanity and love of music to his disciple Amir Khusro.3

Amir Khusro went on to establish the formal structure of qawwali and defined its various forms.   In order to ensure the proper performance of qawwali, he chose 12 young musicians to train as a qawwali troupe.  This first troupe was called Qawwal Bachay (“bachay” means “children”) and its leading qawwli was Miyan Saamat Bin Ibrahim.  The school of music that was established from their efforts is known as the Delhi Ke Qawwal Bachon Ka Gharana (“gharana” means a “lineage of ideology” or a “school or house of”).  The descendants of those original twelve have come to preserve this tradition for more than 700 years.4

Adnan explained that Qawwali is defined by: the “raag,” or sequence of musical notes chosen to create the melody; the “lay,” which is the tempo; and the “taal,” which is the “rhythmic pattern.”  Amir Khusro wrote the lyrics of qawwali using several languages to make them familiar to his audience, including Arabic, Farsi, Turkic, and Hindi.  With his usage of these four languages he laid down the foundation for the creation of Urdu, his intent being to unite people of various dialects with one new language.  Urdu is now spoken by four hundred million people and is the official language of Pakistan.5 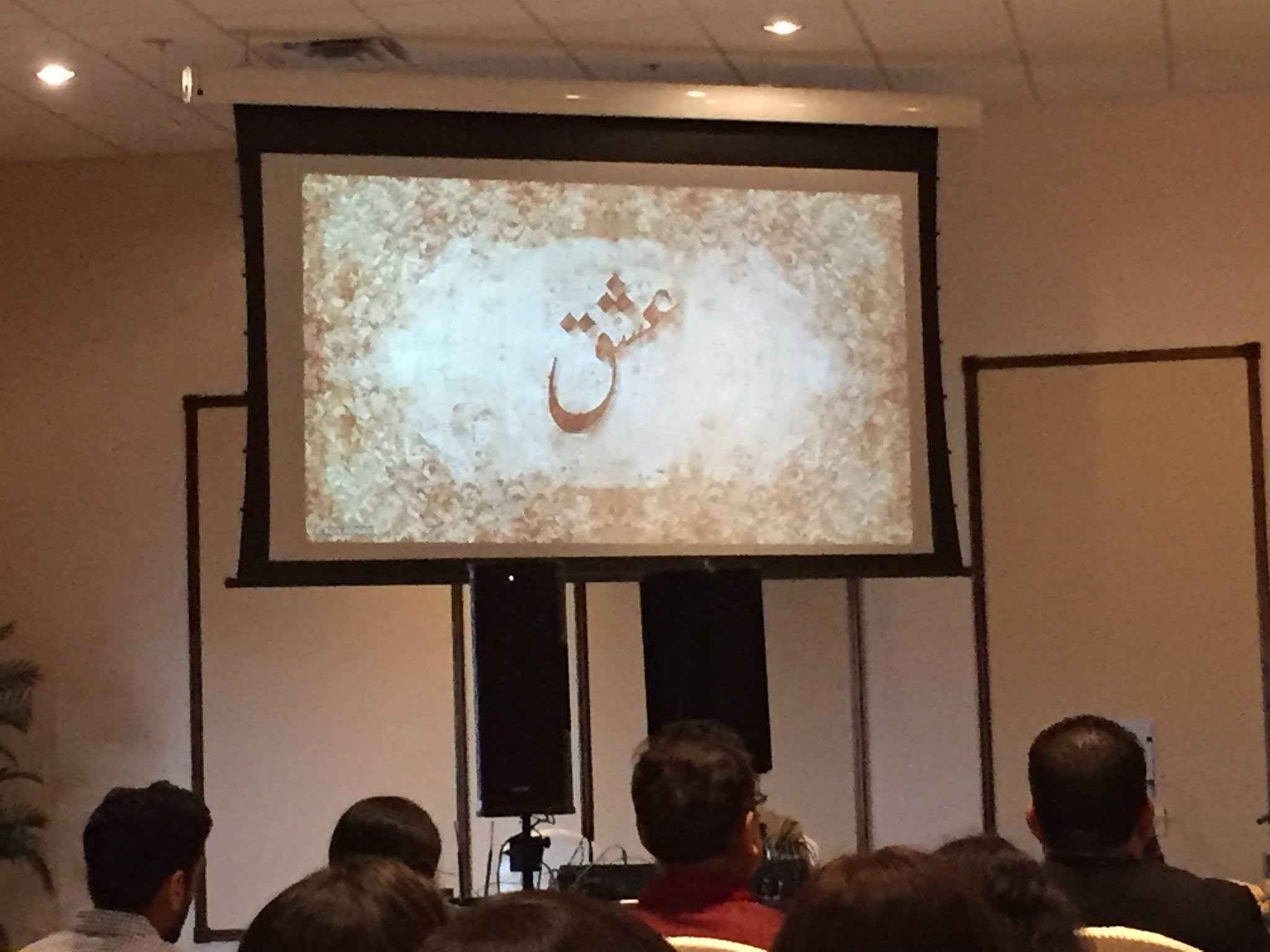 Qawwali can be classified both in terms of music and of poetry.  In a larger sense it is made up of four elements: music, knowledge, awareness, and spiritual knowing (or “gnosis”).  Adnan says, “Qawwali is, in essence, the integration of spiritual, philosophical, religious, musical and poetic elements to create a vehicle to facilitate a spiritual connection between each participant of the Mehfil-E-Samaa and his beloved.”  The finale of the presentation was the performance of the Mehfil-E-Samaa, or “gathering for spiritual listening.”

It was clear that the audience in the Crystal Banquet Hall was mesmerized by the mystical, uplifting ambiance created by the sincerity and artistry of the qawwali performers of the Ghayoor Moiz Mustafa Qawwals.  The troupe chanted and sang while clapping their hands and playing musical instruments: two harmoniums (a portable keyboard with bellows) and two types of drums, a tabla and a dholak.6 The energy in the room radiated from the informative speaker to the passionate performers to the joyous and grateful audience participants.  The evening was truly an enriching one.   Some comments of the attendees:

Imran Rajwani said that he had not attended a live Qawwali performance in twenty years and was somewhat reluctant to attend, not knowing what to expect.  However, at the end of the presentation he was very glad to have come.  He found it to be “very authentic” and appreciated how the Ghayoor Moiz Mustafa Qawwals were able to keep the authenticity of their highly esteemed qawwali lineage.

Nouman Shafi, felt the performance was “very well done,” and he felt he gained “so much knowledge that would have taken years to capture.”  He enjoyed how the live performance was so well explained in a way that was so easy to understand, of an art form that is “not common in this part of the world.”  He also enjoyed meeting others in the audience who had his same love of qawwali.

Azad Khan of Radio Azad enjoyed the beautiful recitation as “so far the best I’ve been to” and appreciated the “crash course of qawwali and music that anybody can learn from.”  They were able to create the “’communal ambiance” that led to the appreciation of “love of the divine and humanity.”

The mother and father of six of the members of the Ghayoor Moiz Mustafa Qawwals were also in attendance and clearly beaming with pride after the performance of their sons and nephews.  Their father, the renowned Fareed Ayaz Qawwal, said he enjoyed the “systematic presentation” of the qawwali by his protégés in conjunction with the explanation of their performance by Ally Adnan.  He felt that it gave the audience a better understanding of the art form in a scholarly as well as a practical manner.

Almas Muscatwalla of the Islamic Arts Revival Series said that her takeaway was that while she had always enjoyed the historical, religious, and spiritual aspects of qawwali, this evening provided her with something more.  She came to see that qawwali speaks a “universal language beyond cultures…[it speaks of] love to and for anybody.”  She said she enjoyed “every bit of the journey” this evening, which led her towards attaining such understanding.

Sana El Lakis enjoyed learning about qawwali.  She is of Arab descent and was not familiar with qawwali.  At the end of the evening, she came to realize that qawwali is similar to an art form from her heritage called, “muwashahat,” which also deals with the topic of love and mysticism through classical Arabic music and poetry.7 She realized that “not just in Islam, but in all faiths [there is the running theme that all creation] should be loved,…[which she sees as what] connects all religions.”

Nikhat Qureshi felt “literally goose bumps throughout the evening” especially as she came to fully comprehend and witness that qawwali is made up of the four elements of “music, knowledge, awareness, and spiritual- knowing.”  She expressed that she felt “enlightenment and ecstasy.”  She added, “The evening could not have been better…[it was] world class…[and] amazing beyond words.”

Thank you to everyone who joined us at the event.

Special thanks to Ally Adnan for sharing his presentation slides to aid in the writing of this article.

In addition, the following references were used: